Look around. There's something in the air. People are scared.

Ziyal : Well, what's going to happen to you?
Garak: Ooh well, let me tell you a story. I once knew a Cardassian, a dashing, handsome young man with a promising career, but one day, through no fault of his own, he found himself exiled and alone with nowhere to turn. But did he give up? No. He struck upon a brilliant plan: instead of fleeing for the rest of his life he sought shelter in the one place no one expected him to go: in a stronghold of his people's most hated enemies. There, surrounded by hostile strangers, he built a life and there, against all odds, against the merciless logic of the universe itself, he thrived.
Ziyal: By becoming the greatest tailor in the galaxy.
Garak: And the moral of the story, my dear, is to never underestimate my gift for survival. 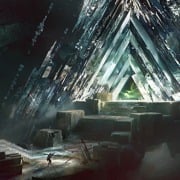